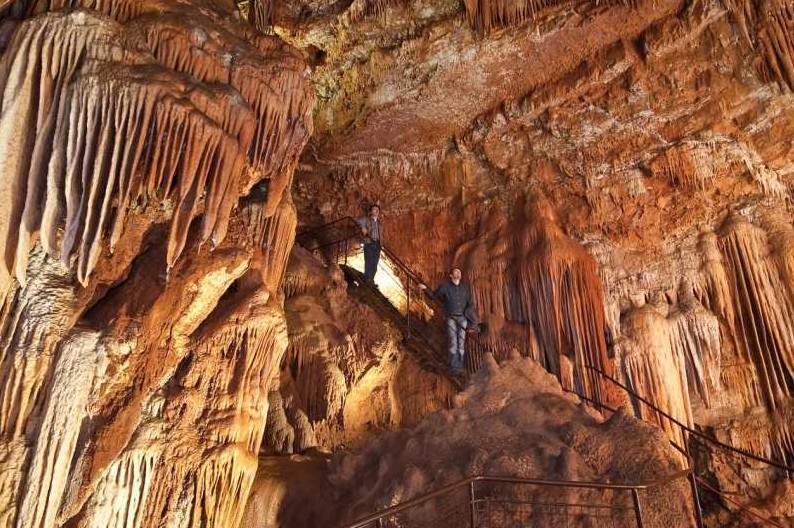 Meet the mystical world of nature which has been developing for thousand of years, far away from the light of the day and the human eye. Visit the underworld the BAREDINE CAVE.

This cave is a treasure chest of stalagmites and stalactites, underworld sculptures created through time by the patient work of water. Such shapes have been created, some of which are exceptional, such as the 10 meter long and high curtains, a very realistic sculpture of Our Lady, the body of a milkmaid called Milka, the leaning tower of Pizza and snowman the torchbearer-who has become the trademark of our cave. In one of the atriums, you will pass a crater that is 4m wide and 66 m deep which goes down to the underground lakes. And so through five halls, five galleries of abstract and realistic sculptures, a pleasant 40-minute walk, accompanied by our guide and custodian. The excitement of this adventure is also meeting the animals of the underworld. You will see the human fish and endemic animals that live only in this environment, miniature see-through crabs and insects. We aren’t the only ones that have visited this kingdom of the God Had. At the cave’s entrance, there is a museum showcase where pottery of prehistoric man has been exhibited. Our far ancestors would probably leave the pots during the hot, dry, summer day to collect the precious water, drop by drop.

This cave, the BAREDINE cave, even has its own love story from the 13th century. If one should believe a legend, a Poreč nobleman named Gabriel fell in love with a beautiful milkmaid from Nova Vas called Milka. Gabriel’s mother tried, in every way, to diminish his love for her, but she couldn’t, so she gave 3 gold pieces to highway robbers to secretly kill Milka. The robbers didn’t kill the milkmaid but instead threw her into the cave. When Gabriel found out of his love’s ill fortune, he got on a horse and disappeared. Only his horse was found but near another cave. The story has it that the stone body of the milkmaid is slowly skidding, from century to century, down to the bottom of the cave where we can see it now as it is seeking her lover. Today’s cavers claim that one could pass through to the next cave by digging. So as our legend has it, we can assume that one day the bodies of our Romeo and Juliet will meet in the underworld and stay together forever.

The rest of the year opened for individual and group visits with prior announcement at least 1 day in advance.

Guided tours start every 30 minutes with a guide only, who is included in the price. The sightseeing lasts 40 minutes.

Prior announcement for individual visits during working hours is not required.